The initial introduction to the underwater dystopian society of Rapture in the original Bioshock was something that I recommend every real gamer experience (even if you aren’t an FPS kind of person). The familiar themes of authoritarian rule and dark despair from the previous 2 installments make a return and should be a pleasant reminder of the previous roller coaster rides we’ve taken before.. Nostalgically remembering Atlas… if you don’t get that you should seriously sit down and play the first game (wait for Steam sale and buy all 3 games w/ remastered versions for < $15) 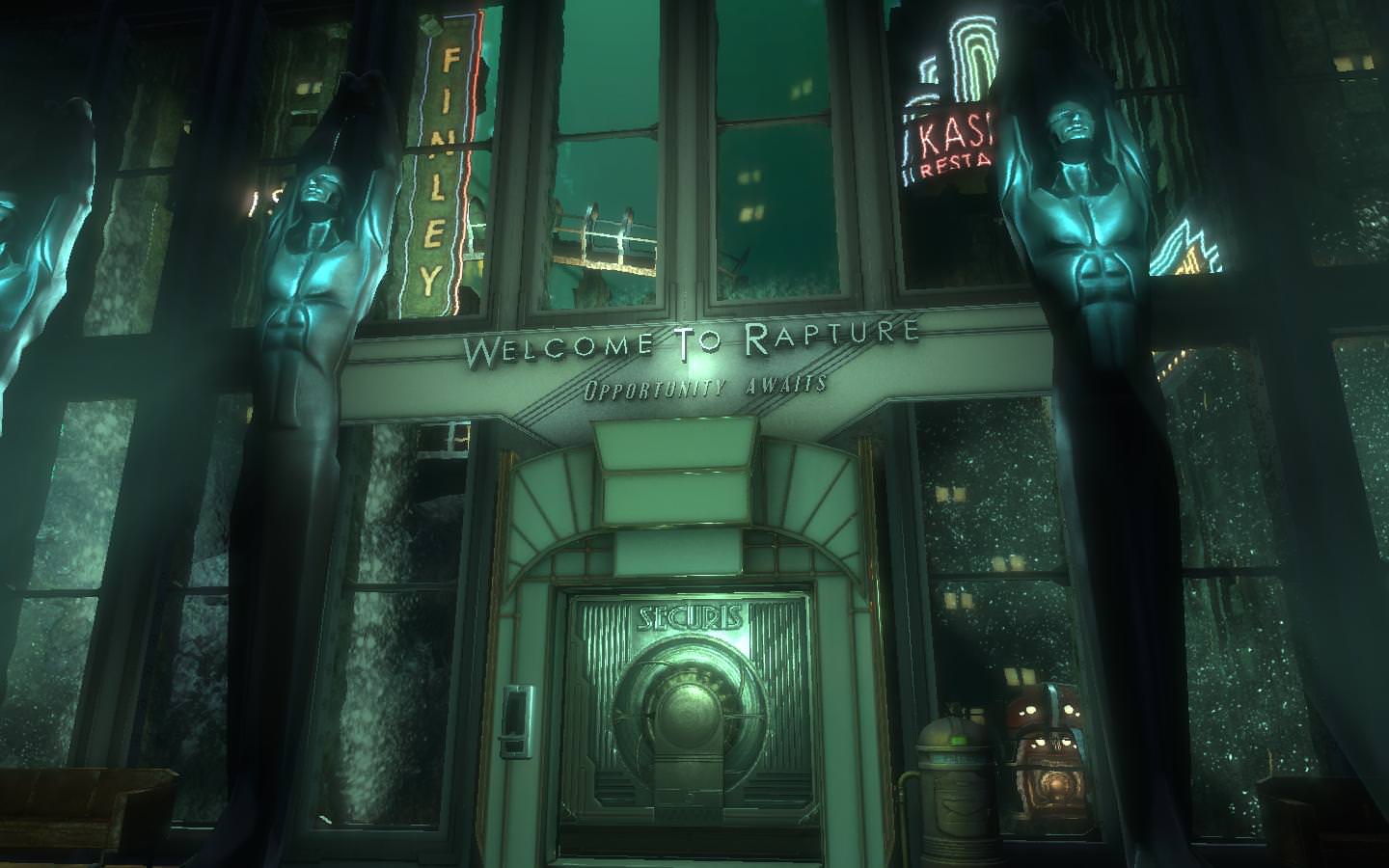 Alright so it’s probably not fair to assume that everyone has played the previous games but luckily the majority of the gameplay doesn’t require any previous series knowledge to enjoy. The change from the enclosed spaces of Rapture to the limitless freedom of the skies of Columbia is a welcome and creative change. The introduction of the Skyhook is the main way to harness some of that open space and feels great when it can be properly utilized in a consequential battle. Unfortunately for all the fun the new mechanics introduced they do get stale pretty quickly and for the most part are completely unnecessary to accomplishing the task of dispatching waves of baddies.. (1)Flying around on a Skyhook loop while you pick off the hordes of enemies slowly without taking a scary amount of damage feels lame just to move on to the next segment. (2) Having Elizabeth’s animation to throw you Ammo/Salts/Health during battle felt amazing the first few times but after learning to exploit the throws; wait till low ammo for toss to maximize shooting time + know she can throw that thing from anywhere (she will teleport for you so don’t stress). For 80% of the game you won’t run into these annoyances (resources are good, no real advantage on Skyhook, no buggy Elizabeth) but it cannot be ignored or missed in a playthrough (maybe I’m the only one that was bothered by this on both my runs of the game).

For the most part the sequenced fights are well planned and force the player to think about cover and how they will use their various Vigors to overcome the reasonable challenge. There are other times when the “ambush” is obviously planned and it feels like you are just doing a dance to kill 3 waves before you can open the next door to do the same thing. While predictable fights and AI funnelling does occur from time to time these occasions are in the minority to the meaningful fights where a pack of Patriots shows up and presents a welcome last annoyance before you can get on a gondola to the next section of Columbia. Combat consists of a combination of using Vigors and guns to dispatch of enemies in whichever way you see fit; I ignored the pistol and leveled up my shotgun, machine guns and sniper while maxing out salts and abusing crows, soul steal and lightning on machines. The option to take combat in whichever direction you want with various Vigor upgrades along with Armor, Health, and Salt upgrades found along the way is well executed and is one of the main reason one would come back for a second / third playthrough. The one gripe I have with the RPG-lite-esque combat system is that the entire clothing upgrades felt entirely pointless to change along the way, juggling the various outfits that gave additional combat effects seemed really awesome but in reality it feels like a cumbersome addition that isn’t even worth paying attention to.

The storyline follows along the lines of a dystopian society that hails a demigod and his family. Playing as Booker DeWitt we are responsible for rescuing the princess from her captures at all costs. Without giving anything away (just in case) our damsel in distress is a young girl named Elizabeth who can open rifts into other dimensions, justifying her isolation and protection by a massive songbird. As you can imagine the story plays with themes of freedom and imprisonment, which is particularly interesting given the idea that Columbia has seceded from the United States right after the abolition and obviously wasn’t too happy with that Lincoln guy. While the story is nothing spectacular it delivers an engaging world that feels worth exploring and trying to better understand through the audio diaries scattered.

In reality when the game is at its best (the majority of the time) it shines bright but there always seems to be some lingering blemish that prevents the game from being a true masterpiece. While I wanted to get lost in the beauty and creativity of the circa 1900 American secessionist city of Columbia, the game constantly trips over itself with the inconsequential mechanic or monotonous fight that tend to feel like nothing more than filler.

Overall a worthwhile experience with a few hiccups that prevent it from being a true classic on its own. Expect a remastered version to be released in a few years.

This entry was posted in Game Review. Bookmark the permalink.